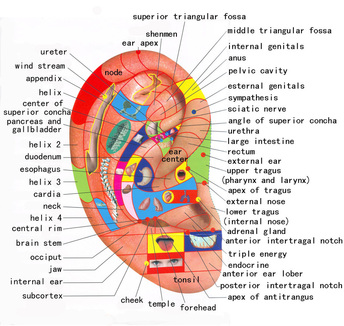 Research has supported the following effects:
Conditions Benefited by Acupuncture

The World Health Organization recognizes acupuncture and TCM as being effective in the treatment of acute and chronic problems involving the following:

Gynecological Disorders such as painful menstruation, infertility in both men and women and menopause.

Many Eye, Ear, Nose and Throat Disorders such as deafness, decreased vision, glaucoma, tinnitus and vertigo.

Post-operative problems such as nausea, mental fogginess and depression.

Other disorders such as fatigue, burn-out, headaches, insomnia, addiction and skin problems.

What does the treatment involve?
Very fine, sterile needles are inserted into five key points in the ear. There may be a slight pinching sensation as the needles are inserted, but this is momentary. They are left for up to 40 minutes, during which time the patient sits quietly, without speaking. Between sessions, patients can have acupressure balls placed on the acupuncture points, to keep them stimulated. These are usually seeds, pellets or tiny ball-bearings, held in place with sticking plaster.